18 Burglary Statistics that Will Set off the Alarm in 2021

What’s the first popular movie that comes to mind when you hear the word “burglary?”

Unless you’ve been living under a rock these past 30 years or so, we bet it’s the 1990 Christmas classic Home Alone. Is there anything funnier than an ingenious eight-year-old boy giving two bumbling burglars a run for their money?

While the movie is first and foremost comedy at its finest, it’s based on a very serious premise that burglary statistics reveal to us – the widespread prevalence of burglary, especially during the holidays.

This thought occurred to us the other day while re-watching Home Alone for the umpteenth time. And that’s why at The High Court, we decided to study the latest stats.

Before we did deep into each stat, let’s take a look at the definition of burglary.

According to the Uniform Crime Reporting (UCR) program, burglary is a forcible and/or unlawful entry with no force employed, or even attempted forcible entry of a structure to commit a felony or theft.

As per the National Crime Victimization Survey (NCVS), the burglary definition is further specified to include premises other than permanent residences, such as hotel rooms, and other structures like garages where there was either only attempted or completed theft.

Finally, the Bureau of Justice Statistics identifies four types of burglary in total:

With that out of the way, let’s crack on with the US home invasion statistics.

1. There are approximately 2.5 million burglaries a year in the US, 66% of which are home break-ins.

2.5 million burglaries translate into 1 burglary every 13 seconds. This fact is fascinating. Out of that number, the police are only able to solve about 325,000 or just 13%. So few cases get solved because, usually, there is no physical evidence or any witness.

2. Burglary rates are the highest on average in the summer between 6 am and 6 pm.

Summer is when most of the break-ins happen. It might come as a surprise, but burglaries are a little bit (6%) more common during the day when most people are at work. One stat shows that there are 1,495,790 burglaries during the day, compared to 1,324,090 during the night.

3. A home without security systems is 300% more likely to be broken into and burglarized.

Burglars always find the easiest way to break into a house.

How do they manage to break in?

Well, usually the best targets are homes without any security systems. Not surprisingly, if your home isn’t secured with any safety system, it is substantially more likely to be broken into.

That leaves a lot of houses as targets since only 17% of all houses have a security and safety system installed.

4. 85% of break-ins are carried out by amateurs in a state of desperation.

A recent study reveals some curious burglary facts regarding burglars’ habits and motivations.

As it turns out:

The vast majority of the burglaries (85%) are the work amateurs. Additionally, 12% of them plan in advance, whereas 41% decided to break in impulsively.

The most common motive is desperation. Some experts suggest that this state of mind makes amateur burglars more dangerous than professionals. Most burglars tend to be males with an average age of 25.

5. 83% of burglars look for homes without an alarm system.

If the home has a security system, 60% of burglars will change their minds. Since homes with no security systems are easier to break into, 95% of them are made possible by some type of entry that requires physical force. That usually involves breaking a window, kicking in a door, or picking a lock.

Burglars use different types of tools, such as screwdrivers, pry bars, pliers, and little hammers. Such tools are easy to conceal, as they are quite common. This makes them difficult to trace and find as supporting evidence.

6. 7.2% of burglaries result in someone being injured.

As per the house burglary statistics, it doesn’t often happen for homeowners to be around when the burglary happens. In fact, someone is home in just 27.6% of cases. Out of those, 26% are harmed.

7. Well-off household owners are less likely to be present when break-ins occur.

Does having a higher income make it less likely that one will be present at the place where the burglary occurs?

In fact, it does.

Homeowners of households with an annual income of less than $7500 are more likely to be present during a burglary.

Conversely, homeowners with higher incomes have fewer chances of being present while the break-in occurs.

In other words, the higher the income, the lower the chances of someone being present during the burglary. Additionally, those who are renting their home are more likely to be burglarized than those who own their home. 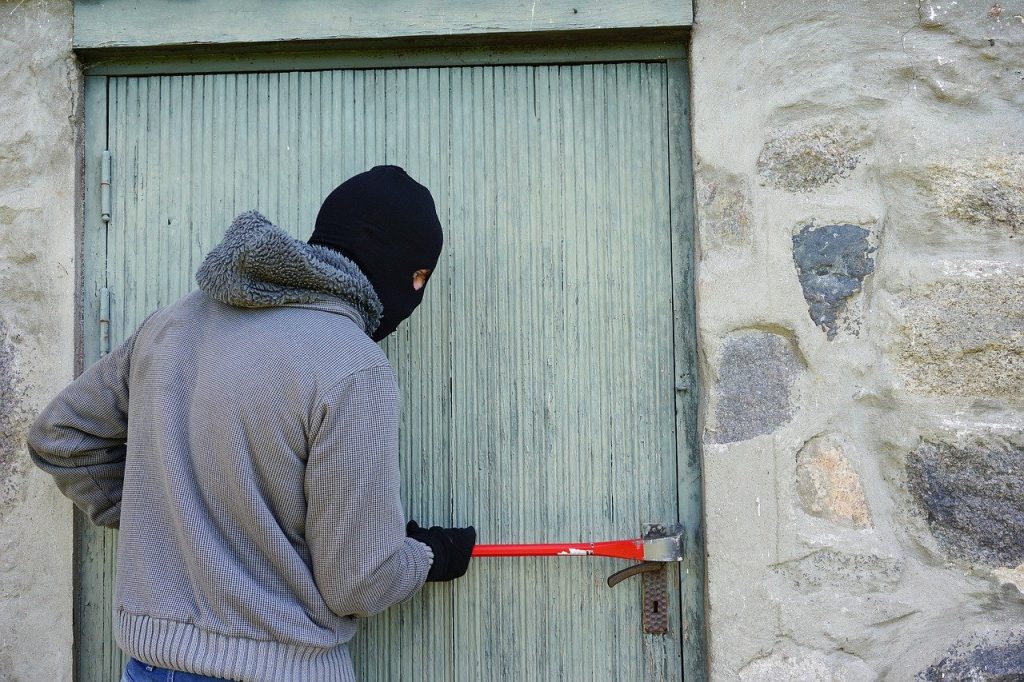 According to home burglary statistics for 2018, all 50 states are affected by burglary. The same year, the state with the highest number of reported cases was California, 164,632.

In terms of metropolitan areas, Lake Charles, Louisiana, had the highest burglary rate in the country. However, the rate of reported burglary crimes has declined significantly in the United States since 1990.

The second most common location is also residencies, but during the night (218,082). The list goes on with high values for burglaries that occurred in nonresidences during the night and the day. Such information is usually sourced from FBI home invasion statistics.

10. The average value of property stolen during a burglary of nonresidences and at an unknown time in 2018 was $3,833.

How much is the stolen property worth on average?

11. Southern states have the most concerned citizens about crime and safety.

Now, let’s talk about the insights from the most recent 2020 survey that highlights trends in people’s perception of crime and their safety concerns.

The level of concern is different in various states. However, the survey found out the most concerned inhabitants are those from the states located in the south.

According to the survey, at the top of the list of the most concerned state residents are:

12. Tennessee has the highest violent crime rate among the states with the most concerned residents.

However, the state with the highest violent crime rate among these states is Tennessee, with 6.2 incidents per 1,000 people.

13. 58% of the respondents are concerned about someone breaking into their home, home invasion statistics confirm.

The survey asked the respondents for their concerns for specific property crimes. The options included break-in (into their home or other places), personal documents, property, digital property, vehicle stolen, vehicle break-in, and property vandalized.

The results showed that people are mostly concerned with break-ins into their homes and other places, and about their vehicles.

14. Women, urbanites, and those with household incomes of less than $150,000 are most worried about property crime, home security statistics reveal.

Nearly four in ten respondents think they are likely to be a victim of a break-in while not at home. However, few demographic categories, namely women, urbanities, and those whose household incomes do not exceed $150,000, are most concerned about property crime.

15. 38% of respondents think break-ins (not home) are most likely to happen.

Regardless of the specific demographic group, over one-third of surveyed respondents think break-ins (not home) are most likely to happen. The respondents share the same opinion on break-ins into vehicles and about property stolen.

In general, the respondents think arson is the least common crime.

16. 33% of respondents use dogs/guard animals as a measure for safety and security.

Respondents also showed great concern about property crimes when further asked about what measures they are taking to secure their property against possible violent home invasions or other crimes.

24% of respondents answered that they have installed a security system, 28% said they possess firearms, 33% own a dog/guard animal, and 25% have security cameras.

Additionally, 29% don’t have any measure employed to secure their safety, and 5% prefer not to say what measures they used.

17. 26% of respondents (or someone close to them) have experienced property crime in the past 12 months.

For the second annual 2020 State of Safety survey, Safewise surveyed 5,000 individuals from all 50 states. For the burglary statistics in 2019 section, the respondents were also asked if they, or someone close to them, experienced any property theft, violent crime, or mass shooting in the past 12 months.

18. Women and urbanites are more likely to have experienced property crime in the past 12 months.

One of the survey findings is that one in four respondents disclosed a personal experience with a property crime in the past months.

The survey results also showed that those respondents who experienced a recent property crime are notably more likely to go the extra step and use extra security measures to protect their homes.

The official home robbery statistics and the survey findings presented are quite helpful to get an overview of the crime rates in the US, as well as the state of safety among the citizens. People tend to be seriously concerned about break-ins. At the same time, home invasion statistics for 2018 show burglary is quite a common crime.

In conclusion, burglary statistics reveal many of the burglaries are actually residential and specifically into a home. It’s interesting to see that factors like household income have a vital role to play in the possibility of having your home burglarized.

Other important parameters are what kind of measures are put in place to prevent burglaries.

Presumably, whether or not you have an eight-year-old trickster in the house also plays a role, even though the survey sensibly omitted that question.

Q: What percentage of burglaries are residential?

Burglary statistics for 2018 reveal 2.5 million burglaries take place each year, and roughly 66% of them are residential break-ins. Burglary and other property crimes like larceny and motor vehicle theft have shown a significant decline during the last few years. Keep in mind that home invasion statistics by state vary significantly. Overall, though, the number is lower compared to recent years.

Q: What is the most common time for burglaries?

FBI burglary data from 2018 showed 51% of all burglaries occurred during the day, and 32% were committed at night (the rest were unspecified). The chances of home invasion are highest between noon and 4 pm when the homes are usually empty. Also, burglaries are more frequent during the summer, especially in June and July. Another popular season for burglars is winter, especially during the holidays.

Q: How often do burglaries occur in the US?

According to the latest United States burglary statistics, a burglary happens once every 13 seconds.

Q: What are the odds of being burgled?

One FBI burglary report suggests that each year 1 in every 36 homes in the United States will be the victim of a break-in. Many burglaries don’t involve the use of a weapon or violence. Usually, the burglars want to find something of value and quickly leave the space.

According to burglary statistics, places that don’t have security precautions are three times more likely to be hit. Also, intruders tend to break into homes that are rented and homes with easy access. This includes single-family homes that are detached and homes in the center of blocks.