17+ Violent Crime Statistics that Will Leave You Speechless

Even though most people don’t like to hear about it, crimes happen regularly. And most of the time, innocent people are the victims.

The good news is:

Within the past two decades, the overall violent US crime rate has significantly fallen, violent crime statistics reveal. Over this period, though, there has also been a rise in reported cases over the last few years.

Are you ready to hear all the details about stats on crime, US murders per year, and other violence statistics? Then check out what we’ve prepared for you at The High Court.

The peaking years of violent crime in the United States were from 1960 to 1991. During this period, property crime doubled. The crime rate from 1990 to now has steadily declined.

That being said, criminal statistics for the United States and prisoner facts say the country still has more prisoners than any other.

3. In 2018, the clearance rate of murder and manslaughter was the highest, with 62% of cases being cleared.

Investigators seem to have done an excellent job in 2018, clearing nearly two-thirds of all murder and manslaughter cases. This means that most cases ended up with an arrest or exceptional means.

While the clearance rate of murder and manslaughter has been the highest, according to the Bureau of Justice Statistics, motor vehicle thefts have the lowest clearance rate, at only 13%.

Let’s check out the definition of aggravated assault first:

Any type of attempt at bodily harm to a person is aggravated assault. What actually makes the assault aggravated are some of the following factors – a weapon, the high status of the victim, the actual injury, death due to the assault, and the intent of the deed.

Basically, we can see that aggravated assault is one of the top crimes, which says a lot about the type of violence in the US.

How often are weapons used in aggravated assault?

Here are the violent crime statistics the FBI has gathered.

Apart from that, in 25% of the cases, the perpetrator used their hands, fists, or legs. Knives and similar objects were used in 17% of the cases.

Believe it or not:

In most cases (31% of the aggravated assaults), the perpetrator used other undefined objects or tools as weapons.

What Is the US Violent Crime Rate Now? Violent crime is fourth on the list of most common types of crimes in the US. First on the list is property crime, followed by theft and burglary. Overall, long-term trends show a significant decrease in violent crime.

Violent crime is associated with urban areas. But sometimes, it happens that a particular city exceeds the national average by as much as one-quarter.

That being said, let’s take a look at the violent crime rates by state in the US.

8. Alaska is the most dangerous state in the US.

Economic conditions are closely related to crime. So, it should come as no surprise that states with a larger population and less economic power have higher violent crime rates. According to 24/7 Wall St., the five most dangerous states are Alaska, Arkansas, Nevada, Tennessee, and New Mexico.

In Alaska, there were 885 violent crimes for every 100,000 inhabitants in 2018 – way higher than the national rate. The most common violence in Alaska is aggravated assault. At the same time, rape is also quite common. Actually, Alaska has the highest rape rate nationwide.

When it comes to violent crime statistics by city, the most dangerous city in Alaska is Anchorage.

9. The District of Columbia had the highest reported violent crime rate in 2018, crime rate statistics reveal.

Sadly, when it comes to crime in America, the highest reported violent crime rate is in the nation’s capital. The estimates show that there are 995.9 violent crimes per 100,000 inhabitants. To a certain extent, this may be a result of the high poverty rate, even though unemployment has been falling in recent years.

10. In 2020, some major US cities have been experiencing lower violent crime compared to 2019.

According to violent crime statistics for 2020, the rates declined in Chicago and New York, especially in April and May. This is partly the result of the Coronavirus pandemic and the lockdown and physical distance measures imposed at the time.

11. In 2018, there were 16,214 reported murder and non-negligent manslaughter cases in the US, murder statistics reveal.

12. Louisiana’s murder rate was two times higher than the national average rate in 2018.

When it comes to murder rate by state, in 2018, the most dangerous state in the US was Louisiana. The murder rate was as high as 11.4, which is double the average national rate.

South Dakota, where the murder rate was 1.4, was the safest state. On the top of the list, following Louisiana, you’ll find California, Texas, and Florida. Keep in mind that felons killed by an officer or killed during a felony by a private citizen are not included in these statistics or in the US homicide rate by year.

The Second Amendment gives Americans the right to keep and bear arms, and many do. In fact, over four in ten US households have at least one gun in their home, although that percentage varies significantly from state to state.

14. Around 63% of murders and non-negligent manslaughter cases in the US were carried out using a firearm.

In total, 10,265 murders were executed by firearms. In 2018 only, murders were predominantly made using a handgun, a total of 6,603. Handguns and firearms are followed by knives or other cutting instruments, with a total of 4478 murders.

15. African-American men are much more likely to be victims compared with white males. 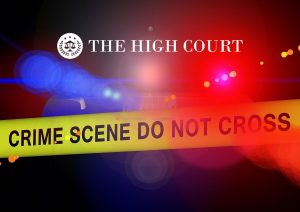 Still, in some Eastern European countries, crime and violence have threatened their social stability and influenced their development. According to the Crime Index, the highest-ranked countries are Ukraine, where a civil war has been ongoing in the east since 2014, and, oddly enough, Sweden, with scores of o 48.84 and 47.43, respectively.

Some of the developing countries of Latin America have the highest violent crime rates in the world.

Crime and violence have become a major obstacle for their future development. During the early-1980s and the mid-1990s, the homicide rate in Latin America increased by a whopping 50%.

Unfortunately, South and Central American countries are still at the forefront, with the leading crime and violence rates. In fact, some of the countries that have the highest homicide rates globally are El Salvador, Honduras, Jamaica, St Kitts, and Venezuela.

The top two on the list of countries with highest violent crime rates are El Salvador and Jamaica. The most dangerous cities are also situated in this region.

18. Los Cabos in Mexico is the most dangerous city worldwide in 2020.

In Latin America, most violence is caused by drug and weapons trafficking, as well as gang wars. Approximately 38,000 drug-related fatalities are estimated in Mexico between 2007 and 2012 alone.

When it comes to violent crime statistics, you can see that most of the time, things aren’t quite as they seem. For instance, the United States crime rate isn’t as high as some Americans may think now. Of course, this is compared to what it was back in the days.

Nowadays, due to the enforced police system and tighter restrictions, violent crimes have been reduced. We hope that in the near future things will stay like that.

Also, it seems that crime rates aren’t always linked to the economy of a country. So, poorer countries don’t regularly have a high rate of violent crime. However, demographic changes and the use of drugs have, most of the time, been linked to crimes.

Q: What is the homicide rate in the United States?

Q: Are crime rates increasing in the US?

It’s important to understand that crime rates fluctuate from one year to another. This year’s data, for example, shows an increase in the homicide section, but all other crimes are in decline. The preliminary records for the first six months of 2019 show an overall decrease of 3.2% in the number of violent crimes in the US, compared with the numbers reported for the same time in 2018.

Overall, the numbers have decreased over the past 20 years. During the 1960s and the 1980s, the crime stats were much higher. Over the course of these decades, the murder rate skyrocketed from 5.1 per 100,000 people to 10.2. Some of the most common crimes that fall under this category include rape, murder, aggravated assault, and robbery.

The number of property crimes during the first six months of 2019 has 5.6% decrease compared with the data for the same period of the previous year.

The property crime category includes motor vehicle theft, larceny-theft, and burglary. Arson is another property crime, but its data is not included in this category due to fluctuations in reporting. The numbers from January to June 2019 show that arson decreased by 12.5% when compared with the data of the previous year.

Q: How many crimes are committed each year?

In Chicago, we have seen an increase in the murder rate in comparison with other years, with 21 nonnegligent manslaughters and murders per 100,000 residents. The crime rates of a particular area depend on various factors like its economic conditions and its population density.

Q: What are the 4 violent crimes?

According to the FBI and its assessments of trends in the volume of violent crimes, there are four primary offenses that are regularly reported by all law enforcement agencies in the US and are common in all states of the country. These four crimes are nonnegligent manslaughter and murder, forcible rape, aggravated assault, and robbery.

Other crimes that are considered violent by their effect or nature are kidnapping, extortion, weapons possession, and drug selling. But as we said earlier, the four crimes that are used as the nation’s barometer of violent crime and also form the Violent Crime Index are nonnegligent manslaughter and murder, forcible rape, aggravated assault, and robbery.

There are also property crimes, which include burglary, motor vehicle theft, and larceny-theft. Arson is another property crime, but the Hierarchy Rule doesn’t apply to this type of offense.

The statistics of some specific crimes are recorded by the annual Uniform Crime Reports (URC) by the FBI and also by the Bureau of Justice Statistics and its National Crime Victimization Surveys. The FBI also publishes annual reports of law enforcement and its status.

According to some studies, there may be a correlation between violent crimes and societies with low income. In societies that have low socioeconomic inequality and are independent of thermal climate, the levels of violent crimes or intentional homicides are low, violent crime statistics confirm.

At an individual level, there are other factors that influence a person to commit a crime, especially when it comes to serial killers. These include the psychological, biological, and social status of the person.

Some people commit a crime out of pride, revenge, greed, anger, and even jealousy. There are other people who do it for admiration, the adrenaline rush, and excitement. They would carefully plan everything in advance to decrease risk and increase gain.