Have you ever wondered which are the highest crime cities in the US? Or what are the most dangerous states in the US?

Murder rate by state is one of the numbers that can answer those questions. It represents the number of murders per 100,000 people.

However, most of the time, we have to consider other factors when determining how dangerous or safe a state or the city is.

While one might think that the most dangerous city is the one with the highest number of murders, that is not always the case.

Sometimes, violent crime rates do not follow murder rate trends, and a very violent state might not be the most murderous one.

At The High Court, we decided to take a look at these murder rates per capita by state in order to make the situation clearer.

The Murder Rate in the United States

How many murders were there in the USA in 2018?

Looking at the United States homicide statistics for 2018, there were

The difference between the two is sometimes confusing, but the distinguishing factor is the forethought or its absence. While the definition’s wording is different from state to state, the basic differentiation is the same.

Murder involves some planning and/or a state of mind that implies forethought, while manslaughter is considered a crime of the moment, without the previous intent to kill.

What is the homicide rate in the United States?

US murder rate by year:

3. East St. Louis is the deadliest city in the US.

What city has the highest murders rate?

What state has the highest murders rate?

Observing the murder rate by state, the ten states with the highest murder rates are: 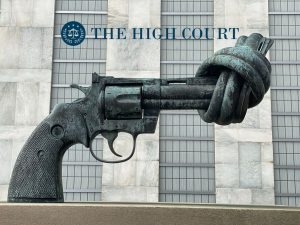 5. Looking at the highest murders in the US by state in 2018, the state with the highest number of murders was California with 1,739.

Texas recorded a total of 1,322 murders, making it the second-highest-ranking murder rate USA state by numbers.

The third-highest state by the number of murders is Florida. with 1107 murders in 2018, with the most dangerous city deemed to be Florida City.

The state with the fourth-highest number of murders was Illinois, where 884 people were murdered in the course of the year.

Looking at homicides by state, Pennsylvania takes fifth place, with 784 murders in 2018.

When it comes to murders by state, people are the least likely to get killed in Vermont.

In third place, with 13 recorded murders, is the state of Wyoming.

Rhode Island comes fifth, with a murder death toll of 16, followed by North Dakota with 18.

Which state has the highest gun homicide rate?

The state with the highest firearm mortality is Mississippi, CDC homicide statistics show.

The following highest-ranking states are:

9. Murder rates increased by 23% in June of 2020, while the violent crime rate dropped.

2020 witnessed a rise in murders in major US cities according to the analyst Jeff Asher.

Even if the overall crime is down by over 7%, including violent crimes, which are down by 2.2%, murder in American cities is recorded a massive 23% increase in June alone.

What is the most dangerous city in the United States?

10. The most dangerous city in the United States is Detroit, Michigan.

With 2,007 violent crimes and 4,304 property crimes, Detroit is considered to be the most dangerous place in the US. The poverty rate of 37.9% and the unemployment rate of 9% are the main causes of high crime rates.

Memphis, Tennessee, is in the second most dangerous city, with 1,943 violent and  6,405 property crimes.

The city recorded 186 homicides in 2018, most of which involved firearms.

With 1,911 violent crimes and 6,313 property crimes, Birmingham, Alabama, is the third most dangerous city, as aggravated assaults made up for 70% of incidents in 2018.

The biggest percentage rise in homicides was recorded in Nashville, where the number rose from 4 to 14 homicides during the observed 30 days.

Looking at homicide by city, more people died in Kansas City from murder than from COVID-19 during the first month of lockdown, as the murder rate rose by an alarming 23%.

Kern County in California had the highest homicide rate in the country, with a rate of 9.2 per 100,000 people and a total of 84 homicides in 2019. Still, that number is smaller than the year before, when it stood at 96. This marks the third year this county is at the top.

The second-highest murder rate by county is recorded in San Bernardino County, California (6.7).

14. Alaska is the leader among the most violent states.

What is the most dangerous state in the US in 2019?

The states with the highest murder rates usually have high poverty rates and high unemployment.

Aggravated assault is the most common thing that might happen. This explains why Alaska is not too far up the murder list of homicides statistics in the US. In fact, it’s 12th lowest, with 47 murders in 2018. Still, it is the most dangerous state.

With an imprisonment rate of 343 and a relatively low poverty rate of around 11%, it is a violent place compared to the rest of the US. Additionally, a rape rate of 161.6 contributes to the ranking. The most dangerous city in Alaska is Anchorage.

15. New Mexico is the second most violent state in the US.

Observing the states by crime rate the second most violent state is New Mexico, with a violent crime rate of 856.6 per 100,000 people, even though it’s the 22nd lowest in murders.

A total of  17,949 violent crimes was recorded in 2018, and the most dangerous city is considered to be Gallup.

16. The third most dangerous state in the US is Tennessee.

Looking at violent crime by state, Maine, Vermont, and New Hampshire are the safest states.

In 2018, Vermont recorded only 10 murders, making it the state with the fewest people killed. It has the lowest robbery rate nationwide and is the fourth lowest on the aggravated assault list.

It’s considered one of the two safest states in the USA. Vermont’s most dangerous city is Rutland.

19. New Hampshire had an 11.1% drop in violent crimes and is the third least violent state.

New Hampshire has the lowest poverty rate in the country, just 7.6%. Looking at the crime rate by state in 2018, it recorded the largest decline in violent crimes. Its most dangerous city is Manchester. Looking at the weapons used to commit the crime, the majority of murders in the US are carried out with guns and firearms. The total firearms death count for 2018 was 10,265.

Knives were used in 1515 cases, and 443 victims were killed with blunt objects or weapons such as hammers and clubs.

Finally, 672 people were killed by the use of hands, feet, and other personal weapons.

21. Men use guns as a weapon of choice two-thirds of the time.

Women use guns in a lot less than 50%, but guns are still the most common weapon of choice for both sexes.

After guns, women are more likely to use knives or any object at hand. Women kill more by stabbing, choking, poison, arson, drowning, explosive, and even throwing someone out the window. In contrast, men tend to commit murders by beating, strangulation, and blunt objects.

Poison was always labeled as a woman’s weapon. In fact, women are four times more likely to use it than men even if there is a greater number of men that have killed with poison (1%), simply because they kill three times more often in general.

Women use drowning as a way to commit murder seven times more than men.

If you are an average American, the odds of you being murdered are as low as 1 in 133. This is the conclusion of the government’s first study on the risks of violent crimes.

Looking at murder numbers by gender and race, men are killed considerably more often than women.

Black men are most likely to be the victims of murder.

Now, let’s take a closer look at the full list of homicide rates by state:

24. Mississippi, Louisiana, and Alabama had the highest homicide rates in 2018.

Before we move on to the international murder rates statistics, here’s the full SDC list of the

homicides by the state in the United States for 2018.

The definite 2019 murder rates by state data are yet to come out. The murder rate by state 2020 data will be available in 2021.

25. The murder rate by continent shows North and South America have the highest numbers.

United States murder rates are just below the world average at 5.0.

26. The first five cities in the world by murder rate are in Mexico.

The ten cities with the highest murder rates in the world are:

When it comes to murder rate by city, the city with the most homicides per 100,000 total population, 138, is Tijuana. Located just 15 miles from San Diego, this city recorded 2,640 homicides in 2018 per population of just under 2 million.

The countries with the most murders are:

Many countries with the lowest murder rates are in Asia. The leader is Japan, due to its very strict gun laws and the death penalty by hanging for firearm murders.

The UN’s Global Study on Homicide records the following ten countries as the ones with the lowest murder and homicide rates.

Those are Japan and Singapore with a rate of just 0.2, Hong Kong and Luxembourg with 0.3, Indonesia with 0.4, Norway, Oman, Switzerland, and the United Arab Emirates with 0.5, and China with 0.6.

Violent crime the homicide rates follow poverty and unemployment trends. So, it’s no surprise that the states with a large percentage of people living below the poverty line would see high crime rates.

The full homicide stats and analyses for 2019 and 2020 are yet to be published. However, it’s already clear that the first half of 2020 witnessed a staggering rise in murder rates in most major cities across the US.

While most of the country saw a sharp decline in violent crime and property crime (including burglary), murders were on the rise during the COVID-19 lockdown. What effect that will have on the overall murder rate by state and next year’s reports remains to be seen.