Dan Olweus, a Scandinavian researcher responsible for the academic interest in bullying, defines it as intentionally aggressive behavior that involves a power imbalance and is repeated over time.

Cyberbullying is one form of bullying, and the cyberbullying statistics we’ve collected for you at The High Court are genuinely shocking.

The Cyberbullying Research Center formally defines it as “willful and repeated harm inflicted through the use of computers, phones, and other electronic devices.” Simply put, cyberbullying is when someone is threatened or intimidated electronically rather than in person.

A bit of background:

Until the mid-2000s, no specific laws in regards to cyberbullying were in place due to concerns about violating the First Amendment (specifically, “abridging the freedom of speech.”) Today, however, 48 US states include “cyberbullying” in their state bullying laws.

Now that we’ve established the basics, let’s check out the latest cyber bullying facts and statistics you should be aware of.

The most recent report on cyberbullying was prepared by the Cyberbullying Research Center in partnership with Cartoon Network. The research targeted tweens specifically because there were no previous studies of children aged between 9 and 12.

When it comes to how common is cyberbullying, the most shocking finding is that one-quarter of tweens have been cyberbullied, seen it, or have been the ones who are cyberbullies.

2. 15% of tweens said they had been cyberbullied, cyber bullying stats confirm.

Everyone reacts differently when it comes to combating cyberbullying. In addition to blocking the cyberbully, tweens are very likely to reach out to their parents for help (50.8%).

Other cyberbullying cases were resolved with a different action like ignoring the person (42.8%), reporting the incident to the app (29.8%), taking a break from the device (29.6%), or reporting the behavior to their school (11.8%).

4. Half of tweens have been bullied at school many times.

Bullying is somehow synonymous with the school environment and comes in many different shapes and forms.

To put things in perspective, let’s take a quick peek at cyberbullying vs. bullying:

Almost two-thirds of tweens witnessed bullying at school, nearly half have experienced it personally, and around 15% have been bullied many times. Click To Tweet

Statistics on Cyberbullying among Teens

5. 17.3% of LGBT students reported being the target of cyberbullying.

One of the most important events in the history of cyber bullying involves an adolescent. On September 22, 2010, the 18-year-old student Tyler Clementi (Rutgers University) committed suicide after his roommates livestreamed a video of him sharing a private moment with another man. This event resulted in renewed interest in the link between harassment and sexual orientation.

6. 59% of US teens experienced at least one of six types of abusive online behaviors, cyberbullying statistics from 2018 confirm.

Teens are also cyberbullying victims. The six types of abusive online behavior included in the  Pew Research survey are offensive name-calling, receiving cyberbullying pictures they didn’t ask for, spreading of false rumors, constant asking of where they are, what they’re doing, or who they’re with by someone other than a parent, having explicit images of them shared without their consent, and physical threats. 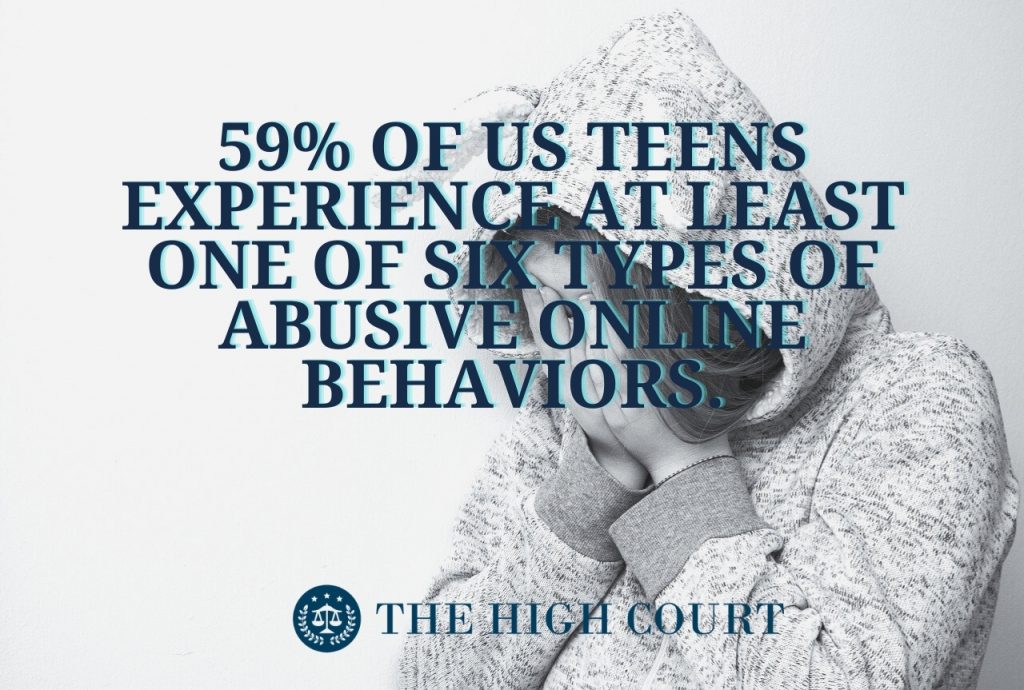 Cyberbullying statistics in the US show teens are most likely to personally experience offensive name-calling (42%), followed by the spreading of rumors (32%).

Gender-wise, girls and boys are just as likely to experience cyberbullying. However, girls are more likely than boys to endure false rumors and receive explicit images they didn’t ask for.

Let’s take a look at the issue of teenage cyber bullying from the parents’ perspective.

8. 45% of parents are very confident in their abilities to teach their teen how to engage in appropriate online behavior.

All in all, nine in ten parents said they are somewhat confident. Among them, 45% said they are very confident when it comes to advising their teen how to behave properly on the internet.

The majority of teens think their parents are doing a good job of addressing online harassment.

Statistics of Cyberbullying among Adults

9. 35% of online harassment victims in the US were targeted due to their physical appearance.

Statistics about cyber bullying and harassment show the top five reasons for online hate are political views, physical appearance, race and ethnicity, gender, and religion. On top of the list are political views, with 55% of respondents saying they have suffered from this form of cyberharassment.

Other common reasons are sexual orientation, occupation, and disability.

On the other hand, a substantial share of Americans have to put up with more harmful forms of harassment. Cyberbullying statistics show one in ten Americans experienced physical threats online. 7% experienced stalking or sustained harassment, whereas 6% have been harassed sexually. 18% of adult Americans encountered one or more of such forms of cyberbullying. Usually, the more severe cyberbullying forms are experienced come alongside name-calling or purposeful embarrassment.

12. 46% of young adults have been called offensive names.

In additional cyberbullying information, 37% said they’ve been the victim of purposeful embarrassment. Moreover, 25% of young adults received physical threats online, 16% were harassed for a sustained time, 15% were sexually harassed, and 13% were stalked.

In total, 67% of young adults were the target of online harassment, and 41% experienced severe forms of cyberbullying.

Women, especially young women between 18 and 29, are most likely to suffer from online sexual harassment – more than twice as likely as men. 19-24-year-old young women are three times as likely to be sexually harassed online as men (20% vs. 6%).

A lot of the harassment and bullying-related behavior takes place on social media. Our latest statistic about cyber bullying focuses on the content for which Facebook took action. The Q2 2020 figure of 2.4 million was up from 2.3 million in Q1 2020.

It should come as no surprise that social media bullying statistics show a significant portion of cyberbullying and harassment happens on Facebook. The largest social network in the world has been the subject of a series of fake news scandals recent years, with Mark Zuckerberg repeatedly summoned by Congress to testify.

The figures for Q2 2020 were significantly higher than those for the previous quarter. In Q1 2020, Facebook removed “only” 9.6 million hate speech containing pieces. The platform defines hate speech as a direct attack on people based on race, ethnicity, religion, sexual orientation, gender, disease, social status, or disability.

16. 0.9% of flagged videos on YouTube were removed due to cyberbullying and harassment in Q2 2020 according to recent cyberbullying stats.

17. 30.8% of removed video comments on YouTube were eliminated due to cyberbullying and harassment in Q2 2020.

According to the latest online bullying statistics, another 9.2% were eliminated due to child safety, and 7.1% were removed due to being hurtful and/or abusive. In total, a whopping 693 million YouTube comments were deleted for various reasons during Q1 2020. 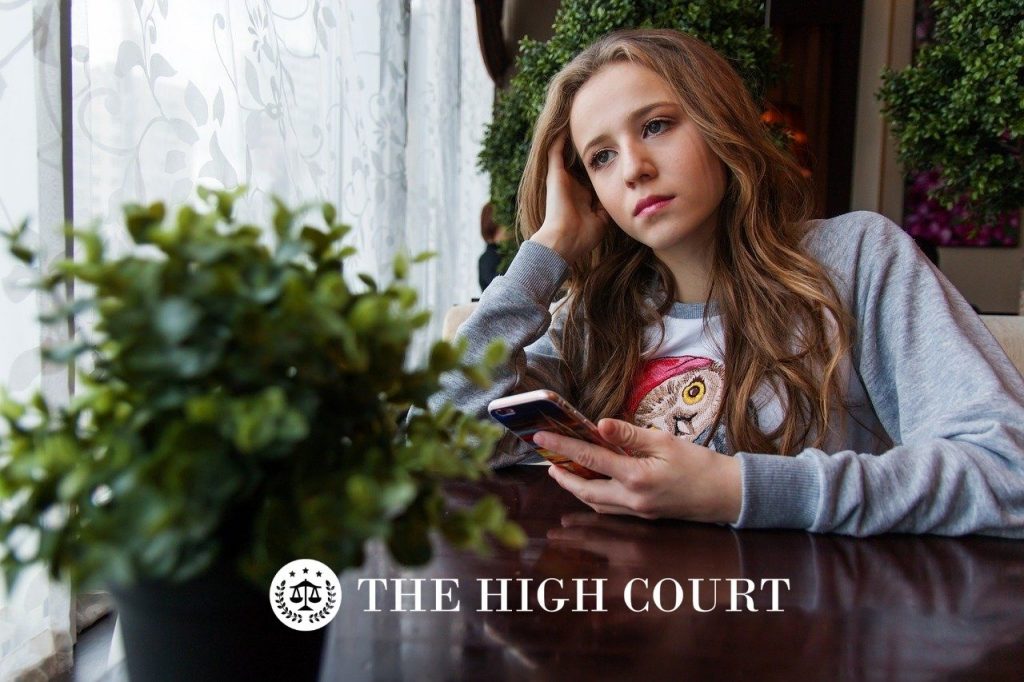 18. Almost 70% of tweens who were victims of cyberbullying said their feelings about themselves were affected in a negative way.

Many studies focusing on negative cyberbullying consequences have pointed out that such behavior can affect victims in a variety of ways.

19. 11% of internet users in the US have depression or suicidal thoughts due to cyberbullying.

Stats on cyberbullying reveal over one-third of internet users (36%) are reducing, changing, or stopping their online activity. 25% are feeling anxious and having trouble concentrating as a result of cyberharassment.

18% contacted a platform for help, but only 2% have contacted an attorney to file a lawsuit.

Facts about cyberbullying show that, most commonly, online harassment results in stress and other negative feelings. It also damages relationships with family and friends. However, victims face other consequences, too. Finally, one in five Americans have faced some consequences of the online harassment experience.

More and more people are experiencing one or more forms of cyberbullying and online harassment. Such behavior is present in multiple environments.

As with cyber attacks, anyone can be a target of cyberbullying regardless of age, gender, and so on, cyberbullying statistics reveal.

Q: What is the percentage of cyberbullying?

Many tweens, teens, and adults are experiencing cyberbullying. A 2020 study shows 20% of tweens have been exposed to cyberbullying in different ways. Additionally, 59% of US teens have experienced at least one of six types of abusive online behaviors. Finally, 41% of American adults have personally experienced online harassment.

Q: Which country has the highest rate of cyberbullying?

Q: What are the causes and effect of cyberbullying?

The causes for why do teens cyberbully may include, but are not limited to, gaining popularity, feeling powerful, generating self-esteem, lack of empathy, and desire to fit it. However, people of all ages might be encouraged by the fact that they can stay anonymous and so ignore the consequences.

On the other hand, the consequences of cyberbullying include stress, negative influence on relationships with family and friends, anxiety, lack of concentration, depression, suicidal thoughts, and negative impacts on physical health.

Q: What was the first case of cyberbullying?

One of the first cases of cyberbullying that was brought up to wider media attention was the suicide of Megan Meier. According to the cyberbullying statistics, she committed suicide after she was a victim of online harassment by a fake profile created by her neighbor under the name of Josh Evans. This happened on MySpace in 2007. Today, the Megan Meier Foundation supports and inspires actions to end cyberbullying. This is just one example of the many foundations that have cyber bullying websites with lots of useful resources on the issue.