19+ Extraordinary Piracy Statistics You Should Read in 2021

Many people have committed digital piracy at some point, whether that’s downloading a movie for free or watching illegal soccer streams! However, be aware that by downloading pirated content, you’re breaking the law!

So, let’s take a look at the piracy statistics for 2020 to explore commonly pirated content areas, including music, videos, ebooks, streams, and software.

Also, check out the pirating facts about rates and the potential revenue losses in the US and globally we’ve collected for you at The High Court.

1. Price was the most common reason for music piracy worldwide in 2017 (for 32% of respondents).

There are many reasons for deciding to get music illegally. Some of them include convenience, inexpensiveness, unavailability to obtain the music legally, speed and reliability, and quality of sound.

For instance, the illegal music downloading statistics show 16% of respondents downloaded music illegally due to the sound quality. Other survey findings reveal people usually rip music for offline listening. This way, they don’t have to pay for premium streaming subscriptions.

2. In the US, 66% of respondents illegally streamed or downloaded music or radio because it’s cheaper free.

In 2017, the primary reason for downloading music illegally was the same in the US as it was in the rest of the world. People opted for pirate music downloads because they’re cheaper or even free.

From those 66%, 21% were respondents aged 15 to 25 who said they used illegal file sharing services to stream or downloaded music or radio on a yearly basis.

3. In 2019, 53.4% of US recorded music revenues were obtained through paid subscriptions.

The Recording Industry Association of America (RIAA) has been gathering the most comprehensive data on recorded music revenues and shipments in the US since 1973. The stats show that after pirated music downloads became common in the 2000s, US revenues dropped significantly.

CD sales peaked in the 2000s and accounted for 92.3% of the total revenue. After that, revenues were gradually dropping until 2015. Piracy is not the only reason, but it certainly influenced the revenues in the music record industry.

4. 38% of music globally is consumed through copyright infringement.

Record companies are trying their best to combat stream ripping, as it’s weakening in many ways the lawful services that invest in music making. This issue remains endemic, though.

Pirating music stats show  32% of all music listeners download music by stream ripping, some 23% download music via P2P or cyberlockers, and 17% use search engines to find content that has been illegally obtained.

These internet pirate figures increased from $15 million in 2017. In 2018, about 30% of stream rippers were copying 112 files, which is equivalent to 11 music albums. For the stream rippers, it may not seem as a big deal. But those whose work is copied probably don’t feel the same way.

6. 63% of respondents in the US illegally streamed or downloaded video content because it is cheaper/free.

People decide to illegally stream or download video content from movie piracy sites for several reasons. Some of them include access to more content, convenience, better picture quality, because it’s free, due to a lack of movie piracy laws, and for other reasons.

Similarly, some 48% of Swedish respondents opted for pirating movies and TV series because it’s cheap or free. 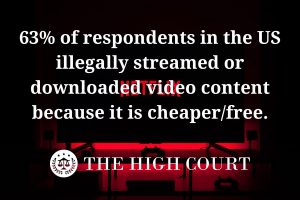 7. 49% of Americans believe the file-sharing network companies should be responsible for movie and music piracy.

At the same time, 53% of internet users believe that the file-sharing network companies should be responsible for movie and music piracy.

Meanwhile, movie piracy statistics reveal about 18% of Americans believe individuals who trade files should be responsible, and 12% think both the individuals and the companies should be accountable. Finally, about one-in-five Americans (18%) have no opinion on who should be held accountable or refused to answer.

8. In 2017, 63% of US respondents stated they illegally stream or download videos on a weekly basis.

A study published in 2018 also examined pirating films and video in the US on a macro-level. The result also included demographic metrics. One of the demographic findings is that there is a significant difference between piracy in less populated or rural areas and major urban areas.

9. Digital video piracy results in domestic revenue losses of between $29.2 billion and $71 billion annually, or a revenue reduction of between 11% and 24%.

11. The commercial value of pirated software in North America and Western Europe amounts to $13.5 billion.

A data survey from 2018 shows there has been a significant generation of revenue opportunities in regions that have strong intellectual property (IP) laws. Revenera collects evidence of software piracy from 194 countries. The only one country for which there is no evidence is North Korea. Worldwide, the commercial value of pirated software amounts to $27.3 billion.

In addition, findings from a 2017 comprehensive study showed that 6.5% of North American households are streaming illegal IPTV services. These figures suggest revenue loss amounting to a whopping $4.2 billion.

Streamers will be punished severely for pirating great quantities of copyrighted content. However, this law doesn’t affect casual internet users who stream illegally.

15. According to piracy statistics, about half of the 13% of respondents who had three or more subscriptions continued to pirate online content.

An online survey of 1,800 respondents in Australia found that nearly one-third of the population had subscribed to streaming video services like Netflix. On the other hand, 13% had three or more subscriptions. Nevertheless, nearly half of them continue to pirate, usually because the content that they pirated wasn’t made available by the services they subscribed for.

The key figures on ebook piracy in the US In 2017 include the number of downloaders, books illegally downloaded, legal e-book purchases lost, and total loss of sales due to illegal downloading. The findings show that about 31,514,064 books were illegally downloaded, and 5,473,875 of legal e-book purchases were lost amounting to a loss of sales of $315 million. 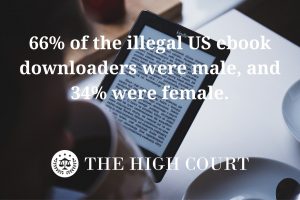 18. Internet piracy statistics show 31% of illegal US ebook downloads were made from a public/open torrent site.

Additionally, piracy statistics show 31% downloaded the ebooks from a public/open cyberlocker, while another 30% of ebooks were obtained from a friend via IM, email or flash drive. Lastly, pirates acquired 27% of the total amount of ebooks from an online auction or resale site, and 27% obtained the ebooks via a closed internal network like Dropbox.

19. 58% of pirates illegally acquired ebooks because it’s convenient and easy.

As per the privacy statistics, 51% of pirates were driven to illegally download ebooks because it was free or cheap. Another 38% of respondents turned to online piracy because the ebooks weren’t available from online retailers.

33% stated they prefer to acquire ebooks illegally, and 17% stated they don’t think they should have to pay for the content.

20. 49% of consumers think that if they knew that they’re putting their equipment at risk by downloading illegally, they would be much less likely to do so.

Another 47% of respondents stated that if they believed they would get caught, they would be much less likely to download ebooks illegally, 44% if they believed it harmed the author, 37% if it became too technically difficult, and 33% if the ebook was available to buy.

Since the beginning of the 21 century, internet piracy has become a growing concern for the most targeted industries. The illegal downloading facts show a pretty clear outlook on the current state of piracy.

Even though music streaming is relatively affordable, some people still choose to download illegally. The same goes for ebooks, streams and videos, and, to a somewhat lesser extent, software.

The most common reason for choosing to obtain media and software illegally are definitely convenience and the fact that it’s either much cheaper or absolutely free. What pirates don’t consider is that media authors and software engineers are suffering significant losses.

Q: What percentage of people pirate?

Media piracy is present for 38% of cases, according to the Music Consumer Insight Report from 2018. In fact, there’s still a percentage of people who like to get their music via copyright infringement. The most common way of stealing music is through stream-ripping and by using cyberlockers or a search engine to locate illegal files.

According to the piracy stats throughout the years, we can see that there has been a drop in the illegal piracy activities online. In fact, a comparison between the Q3 2016 and Q3 2019 has shown a decrease of 6%. In a study including global respondents from 2019, only 4% of respondents said they have used a pirated video service during the previous month. In contrast, the percentage of respondents that went after a pirated video service was 10% a month in 2016.

Q: Is piracy really that bad?

When you consider the potential economic value of the unlicensed use of music, video, stream, book, and software, you can get a clear picture of how bad piracy really is. If you’re still wondering is piracy illegal, in 2020, there was a new Congressional Act aimed at companies that make profit from illegal content. While it doesn’t affect individuals, you should know that you can face prosecution for piracy.

Q: How much money do movie companies lose to piracy?