How many times have you received an email that reads something like this:

I am Mohammed Abacha,the son of the late Nigerian Head of State.Please,I need your assistance to make this happen and please; do not undermine it because it will also be a source of upliftment to you also.

More and more consumers and companies are experiencing scams. But scams and victims are largely concentrated in some countries. Are you interested in reading about the latest scam statistics, including online dating scams statistics?

We’ve got you covered.

As expected, the data varies by country. But thanks to the many victim reports, there’s plenty of insightful info. The types of scams also differ, but some are more common, with catfish statistics revealing catfishing is in the top ten scams.

As you’re probably aware, scamming is a crime whether it’s executed online, via email, over the phone, or on a social media channel. So, why don’t you check out the overview we prepared for you at The High Court?

eConsumer.gov is a partnership of more than 40 consumer protection agencies worldwide aiming to support combating international fraud and scams. According to the International Fraud Report on scamming statistics 2020, the greatest number of reports are for online shopping, followed by business imposters, travel/vacations, and romance scams.

You’ll learn how serious fraud is when you the following fraud statistic.

In total, in 2020, China had the highest number of companies reported for fraud,  followed by the US. The UK was third, with 3,170. Then came France, with 1,971, and finally India, where 1,729 of the reported companies were located.

In 2019, the most common fraud method reported by consumers outside the US was communication via a website and others (38%).

Next, let’s take a look at US fraud facts. 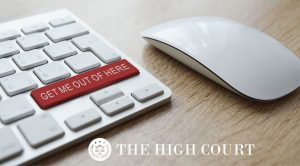 The reports were mainly across the top three categories – identity theft, imposter scams, and phone and mobile services.

About 1.7 million of the total number of reports were fraud reports. For 23% of those reports, a loss was reported, too. The total fraud losses amounted to a whopping $1.9 billion, and the median fraud loss was $320.

These scam statistics are based on consumer reports. Others may be based on surveys.

6. A study of 1,408 Americans and Canadians showed that 47% of the respondents didn’t engage with the fraudster.

Most respondents who experienced scamming on the internet were linked to low financial literacy levels and social isolation. Click To Tweet

The study concluded that one in every five adult Americans are victims of fraud each year.

7. 56% of US respondents experienced fraud in the last 24 months.

A survey about scams in the USA shows that the rate of fraud and economic crime remains the highest in the US. 56% of US companies have experienced it. In comparison to the global average (47%), the U.S. rate is significantly higher.

Worryingly, government imposter scams are on the rise. In this type of scam, criminals pretend to be employees of the Internal Revenue Service, Social Security Administration, or similar agencies that con or threaten people into giving out sensitive information or personal details that can be misused.

9. An Indian national was sentenced to 20 years in prison for involvement in a scam that defrauded US victims of millions of dollars.

On November 30, 2020, an Indian national was sentenced to 20 years in prison plus 3 years of supervised release for his involvement in a scam that defrauded US victims of millions of dollars.

His role included operating and funding an India-based call center between 2013 and 2016.

The District Court for the Southern District of Texas also ordered Hitesh Hinglaj (the Indian national) to pay restitution of $8,970,396 to identified victims.

US Scam on The Internet and Social Media Statistics

11. About 16% of respondents said they learn about scams from social media.

Other than from worldwide scam and cyberattack news stories, the other sources of information concerning scams are word of mouth (41%), websites (22%), TV or radio public service announcement (15%), social media (16%), educational brochures (3%), and in-person meetings or seminars (4%).

12. 47% of social media users find more spam in their feeds, even though networks are working hard against it.

When it comes to being scammed on the internet, only 20% of survey respondents said they were seeing fewer spammy messages on social networks.

Nearly half of respondents reported seeing more spam on their social media feed.

Additionally, about 27% of respondents said they weren’t sure, and 6% didn’t use social media networks.

The next spam stat is about phishing:

13. About 78% of US organizations have experienced social media phishing attacks in 2019.

Hong Kong online scams grew by a massive 35% in 2019 compared to 2018, as shown by the online scam statistics.

On average, about six cases of online shopping fraud were reported every day in 2019. Click To Tweet

Various products and services, such as electronics, fashion products, vouchers, and tickets, are included in the scams

Internet fraud statistics show slightly more than half of online frauds encountered by internet users in China as of March 2020 were prize or lottery winnings. That’s the biggest category by far.

16. 39% of people who were a victim of internet scams and telemarketing in China were between 22 and 28 years old.

According to scam statistics, in the first half of 2019, 39% of Chinese victims who reported telemarketing and online scams (on financial credit) were aged between 22 and 28. However, the data is based on online reporting only, which means some elderly victims may not have been included.

17. Young online game players are the biggest group of victims, with 550 reported cases.

During the outbreak of the COVID-19 pandemic, Chinese scammers were out in force. Fraud cases rose by a massive 47% year on year to 3,243 cases between January 24 and March 13, the period when hundreds of millions of people were confined to their homes.

According to a Chinese internet security company, young online game players are the biggest group of victims.

What are the most common ways that people get engaged in scams?

Phone is the most common way of communication for scams. So, it should come as no surprise that the highest amount of money lost to phone scams.

Over A$43.2 million are lost via phone scams in Australia in 2020 according to the phone scam statistics.

Phone scams are followed by internet scams and social networking scams in the top three. Victims are also engaged via email, mobile app, text, and in person.

In Australia, women (50.6%) and men (47.5%) are almost equally victims of scams. Men have lost slightly more money, whereas women have made more reports.

Scams come in many forms. For instance, due to the increased spending on ethical goods and services, marketers might claim to be environmentally friendly to mislead consumers.

So, the UK Competition and Markets Authority (CMA) will examine descriptions and labels used to promote services and products to determine whether they’re misleading consumers with eco-friendly claims.

That’s because Brits spent a massive £41 billion on products and services advertised as environmentally-friendly in 2019. The spending in this industry has increased almost four times compared to two decades ago.

Now you know how serious scams and fraud are, especially in the US, where most reporting victims are located. The number of reported cases has been increasing every quarter.

The COVID-19 pandemic resulted in a significantly greater number of active scammers and, unfortunately, victims.

Besides the rise in reported cases, there is a significant increase in the amounts lost by victims.  Phone calls remain popular, but the rise of social media and online engagement equipped scammers with new channels.

While the United States, China, and Canada are definitely top locations for executing scams, Australia has been gathering vast data, which helps analysis and produces significant insights.

Identity theft, frauds, and scams in various shapes and forms are here to stay. So, stay vigilant. Oh, and don’t forget about those Nigerian princes.

Q: How much money is lost to email scams every year?

Q: What age group gets scammed the most?

The latest surveys are conducted online, which may not be the best way to gather demographic data since elderly people aren’t used to digital devices and technologies.

However, the Federal Trade Commission reports that Millennials are more prone to lose money in different scams than their elders, including catfish scams, internet catfishing statistics confirm. In 2020, people aged between 30 and 39 made the most fraud reports. Meanwhile, people aged 80 and above who reported fraud and loss have the highest median loss. The FTC data is based on reports rather than surveys.

Q: What is the biggest scamming country?

Nigeria is definitely the most popular nation, with reports on Nigerian scam phone numbers and Nigerian scammers revenge regularly making the news headlines. Americans lost $703,000 to such frauds in 2018.

In 2019, a US financial crime investigation resulted in the charging of 80 people, 77 of whom were Nigerian nationals, for fraud and money laundering offenses amounting to $46 million, scam statistics reveal.

Q: What are the effects of scamming?

Scamming can have different effects besides the obvious loss of money. Scams may influence victims’ mental wellbeing, relationships, and self-esteem.