People often think identity theft is rare. And even if they’re aware it happens often, they are convinced it will never happen to them.

In fact, it’s very easy to find yourself in the company of countless victims of identity fraud.

Identity theft statistics show that almost anyone can be affected by a data breach, which results in identity theft more than half of the time.

Every time you share your personal information on social media or don’t dispose of your mail with care, you are putting yourself at risk of being scammed. Not to mention the use of identical passwords on multiple accounts or not guarding your mobile devices.

Just looking at the latest stats we have in store for you today at The High Court will make you want to change your passwords to secure ones straight away.

Being a victim of identity theft will not only put a dent in your bank account but will have a significant impact on your mood and future behavior. You might keep on running into the consequences long after the original issue is resolved.

1. Identity theft rates dropped by 1.5% in the last couple of years.

But while the trend is somewhat reassuring, the actual figures remain quite alarming:

In 2019, the total amount of data breaches in the US was 1,473. As a result, 164,68 million sensitive records were exposed, cybercrime statistics reveal.

So, how common is identity theft?

2.  In the US, the percentage of people who have identity theft is 33%.

A third of adults have experienced some form of this crime, ID theft stats for 2019 show. That’s 1 in 15 looking at the consumers base of the 14.4 million who became the victims in 2019.

3. Almost 65% of all data breaches were classified as identity theft in 2018.

Internationally identity theft is the first on the list of data breaches, with this kind of incident making up for 59% percent of all worldwide data breach cases reported during 2016.

Looking at identity theft statistics by country, nearly two-thirds of data breach cases in the US were labeled identity theft in the first half of 2018.

How many cases of identity theft a year are there?

Identity theft made up for 20.33% of the incidents, which means 650,572 people had their personal information stolen.

Stats about identity theft show that Georgia, Nevada, and California are the leading states when it comes to this type of crime.

5. The biggest incident in 2019 was the Capital One cyber case when the personal data of around 100 million Americans got exposed.

The biggest cyberattack so far became public knowledge in 2017 when Yahoo revealed that hackers stole information linked to a mind-blowing three billion accounts.

No one is safe – not even the most prominent and wealthiest multi-nationals.

Looking at the 3.2 million identity theft and fraud incidents 2019, 1.7 million were fraud, and about 900,000 went to the consumer complaints category. This left a total of 651,000 for classic identity thefts.

Fraud statistics show that in 23% of instances, there was a reported money loss in the 1.7 million fraud cases. The overall 1.9 billion loss shows a 293 million increase from the previous year, according to identity theft statistics for 2018.

The average amount of money lost was $320.

According to the Insurance Information Institute and FTC stats on identity theft, the top five types of ID theft in 2019 were: 8. Most identity theft reports were lodged by people aged 30 to 39, with heavy social media users and those with high income at a higher risk.

Identity theft trends show the greatest number of identity theft cases is in the age group 30 to 39. In 2019, a total of 170,225 complaints were lodged with the FTC.

The risk increases with two additional factors – how often people use social media and if they belong to a high-income group. ID theft stats suggest being very active on social media and having a high income makes you leave a data trail in more places than others might.

The risks of identity theft rise with age up to a certain point and are highest in the age bracket from 60 to 69. In contrast, the next age group (70 to 79) have reported 17,161 instances of identity theft, while seniors 80 and over reported 5,687 cases to the federal trade commission in 2019.

A study from Cornell University suggests that those over 60 are more prone to be victims of identity theft, as 5% of them may already be less perceptive and more trusting, making them ideal targets for scams and the most likely group to appear in medical ID theft statistics.

Chances are that over the years, seniors might have accumulated more capital than younger people. In turn, this increases the likelihood of being targeted.

A child’s social security number is something that should be guarded very carefully, as children are ideal targets for identity theft.

They represent a blank slate for the fraudsters to build their schemes by creating new accounts and applying for mortgages and credit cards.

The 1 million cases cost the families a whopping $540 million in expenses in 2017, as US fraud statistics show.

It’s up to parents to protect their child’s social security numbers and provide it only to institutions that absolutely need it. Otherwise, a child can discover their identity has been stolen years later when they attempt to open a bank account or take out a student loan. You can request a credit freeze on your child’s report as a form of protection.

11. Over 64% of students say they are not too worried about fraud.

And yet, 15% of students are moderately to severely impacted by identity theft.

Up to 22% of students don’t discover the fraud themselves, making them the group least likely to figure it out on their own, after the under-19s.

One of the curious identity theft facts about students is that they often discover they have been victimized only after they are contacted by debt collectors or when they don’t get credit approval.

12. People with a college degree some form of post-graduate education have 10% more chance of being identity theft victims identity theft numbers show.

Looking at ID theft victims by income and education, chances are you are more likely to be a victim of this type of crime if you have graduated from college.

Additionally, families that make more withdrawals from banks and ATMs are at higher risk.

13. Living in the District of Colombia or California puts you at greater identity theft risk.

You wouldn’t think the state you live in has much influence on whether you become a victim of identity theft or not, as it’s often something happening online. As it turns out, though, it’s very much the case.

One of the interesting facts about identity theft is that living in certain areas of the United States does make you more likely to have your identity stolen.

According to Identity Theft Resource Center fraud stats, you are most likely to be at risk if you live in these 10 jurisdictions:

14. Only 31.9% asked for mental health support after identity theft.

report mental health issues and emotional distress for years after the incident.

Alarmingly, only 31.9% turned to mental health support. Looking at those that didn’t, 44.4% thought it would be of no help to try. They were too preoccupied with sorting the more practical aspects of the incident. 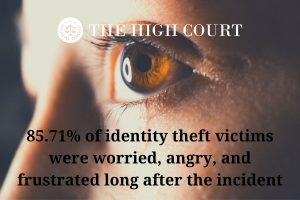 15. Up to 85.71% of identity theft victims were worried, angry, and frustrated long after the incident.

The considerable impact on other nonfinancial areas of life becomes apparent from the following numbers:

The process of recovering from identity theft is often long and tedious and goes beyond just resolving the basic logistics and regaining control of your data and finances.

In fact, the consequences tend to linger on for years after. Identity theft statistics show complications often emerge with various institutions or on different platforms than those the original crime had affected.

A quick reaction is crucial:

The sooner you report identity theft, the bigger the chances of resolving it quickly and relatively painlessly.

Fortunately, even as cybercriminals are getting better at stealing the information, so are protection systems. As a result, most cases of identity fraud get discovered within a week.

Identity theft research has found that ID theft affects your ability to trust, your sleep patterns, your productivity, and your mental health in general.

So, if you fall victim to identity fraud, don’t hesitate to ask for help.

Q: What is the most common identity theft?

The most common form of identity theft is by far financial identity fraud. Your credit score will be the first thing to be affected, as the criminals go for credit cards and bank account details most often attempting a loan or buying things.

Statistics about identity theft tell us many of the fraudsters will start out small with minimal charges to your account. Checking your credit history will let you know if there are some unusual occurrences. If you spot any, don’t hesitate to contact your bank immediately.

Q: Who are the victims of identity theft?

The main risk groups are children, students, and the elderly. Stealing a child’s identity is easier because young children are not as likely to be closely monitored. That makes them twice as likely to become victims than the adults who take precautions.

The next vulnerable group is young people applying for credit cards and opening bank accounts for the first time. According to a recent identity theft statistic, students are four times more likely to have their identity stolen by someone who knows them than all other age groups.

Q: How can I find out if someone is using my identity?

If you believe someone might be using your social security number, you need to contact the Federal Trade Commission, which handles identity theft complaints.

You can order a copy of your Social Security Administration earnings and benefits statement and see if someone has been using your social security number. You will need to visit  www.identitytheft.gov/ and www.socialsecurity.gov/statement/ and contact the FTC at 1-877-IDTHEFT (1-877-438-4338).

You can also contact any of the three national credit bureaus:

Q: What is the first thing you should do if your identity is stolen?

The first thing you should do if you suspect or know your identity has been stolen is contacting one of the credit reporting agencies fraud alert departments. They will place a fraud alert on your credit report and verify other agencies to do the same.

As a result, any creditors or businesses that might offer you credits will see an alert on your credit report for the next three months. If anyone applies for credit in your name, they will contact you to verify your identity.

Q: How often is identity stolen?

Identities are stolen more often than you might think. In fact, a new identity fraud happens every two seconds.

The chances of becoming a victim of identity theft are 1 in 15. Overall, 33% of US adults have experienced some form of this crime.

Q: How to prevent identity theft?

Apart from keeping an eye out for the latest identity theft statistics, there are a few steps you can take to boost protection and ensure your internet privacy: